The rupture of aortic aneurysms: A medical emergency that might lead to sudden cardiac death

Get to know “ruptured aortic aneurysms”

Aneurysms occur most often in people age 40 and older up to 60-70. However, there is increased incidence in younger age group. Men are more likely to develop abdominal aortic aneurysms much more often than women do. A number of factors can play a major role in developing an aortic aneurysm including:

The danger of aortic aneurysms is no warning signs and symptoms to suggest that disease develops. When symptoms present, it indicates the ruptures from the innermost layer to the middle layer and eventually to the outermost layer which attaches the vessel to the surrounding tissue. The ruptured aortic aneurysms cause irregular blood circulation. Aggravating symptoms include sudden, intense and persistent chest pain, radiating to the back or abdomen which pain can be described as a tearing sensation. If symptom exhibits, medical attention must be immediately sought in order to receive appropriate and timely treatment which is highly recommended to be performed within 48 hours.

A 29-year old patient came urgently to Bangkok Heart Hospital with severe chest pain, fatigue, shortness of breath and cyanosis, bluish-green cast to the skin and mucous membranes. After undergoing computed tomography (CT) scan in particular hospital in Nakhon Pathom province, the imaging results showed the ruptures of aortic aneurysms in which emergency treatment was essentially required. Patient was then referred to Bangkok Heart Hospital.

Patient is fairly young and obese with high blood pressure. He has never had annual health check-ups thus he did not know that he has developed high blood cholesterol. During doing his daily activity, he suddenly had severe pain that radiated to the back, causing weakness in the right leg at the beginning and then weakness is generated to the left leg. He could not walk and went immediately to the hospital. The ruptures of aortic aneurysm could be indicate clearly from CT scan. The ruptures caused an obstruction in the blood vessels that supply blood to both legs, thus leg weakness exhibited and blood pressure in the legs could be measured. Cyanosis, bluish-green cast to the skin and mucous membranes was caused by low blood oxygen, less than 90%. After performing heart ultrasound, the images further showed the severe leakage of the heart valve due to the ruptured aneurysms. The ruptures of aortic aneurysms additionally affected both blood vessels those supply blood to the heart muscle and blood vessels of the brain. To treat this condition with serious complications, surgery had to perform by 3-4 highly skilled and experienced cardiothoracic surgeons, anesthesiologists, well-trained nurses and multidisciplinary team.

Surgical treatment involved the bypass surgery to replace affected vessels with new ones in the aorta, blood vessels those supply blood to the brain, arms and both legs. Additionally, patient also underwent heart valve replacement surgery in order to treat the leakage of the valve. All complex surgical procedures were conducted successfully with satisfactory treatment outcomes. Patient could have a full recovery from comprehensive rehabilitation program to restore leg function, gaiting and walking ability. The crucial element for this successful case is an early arrival to the hospital after symptoms presented. The main contribution belongs to highly experienced multidisciplinary team and the readiness in emergency care e.g. blood transfusion and advanced technology. 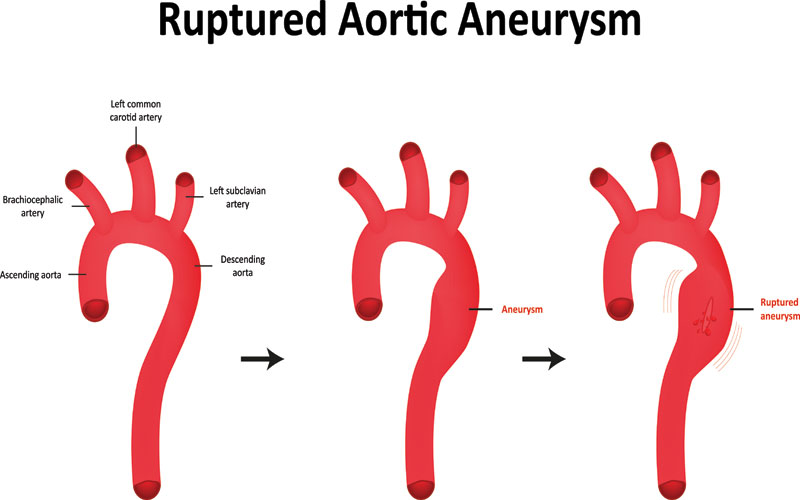 Ruptures can be characterized into 2 main types – the ruptures originated in the front throughout the back linked to the abdominal cavity and the ruptures generated at the back and spread to the chest cavity and abdomen. Mortality rates are significantly different among these two groups. If the ruptures occur in the anterior areas, up to 90% of patients suddenly die within 48 hours if left untreated or treated improperly. If ruptures locate in the posterior areas, the risks of sudden death is substantially reduced to 30%. In this case, medication is primarily used with the 70% survival rate while surgery can increase survival rate to 80-85%. However, medications are considerably superior than surgical approach.