Sudden cardiac death (SCD) in sports: the most common medical cause of death in athletes

During sport seasons especially football or marathon, sport-related cardiac sudden death has been reported occasionally. Although it might seem to be uncommon for athletes who are physically fit, this fatal event can happen to anyone at anytime. The answer remains unclear why this life-threatening condition could suddenly kill athletes who had never presented any signs and symptoms of cardiac disease. Placing into perspective, the program on screening and other measures to prevent sudden cardiac death and improve outcomes is greatly considered an important key.  Find out more information about sudden cardiac death in athletes.

Causes of death in athletes

It has been widely acknowledged that exercise is an effective tool for improving health. Exercise has been strongly associated with beneficial changes in cardiovascular risk factor including blood pressure, lipids, insulin sensitivity and body weight. Numerous studies have consistently shown an association between moderate aerobic exercise and decreased risk of coronary heart disease (CHD). Although the health benefits to exercise are well-documented, patients diagnosed with cardiac conditions who engage in exercise and athletic competitions may on rare occasion experience sudden cardiac death.

The most common causes of sudden cardiac death in young athletes under 35 years of age retrieved from medical database of 1,400 athletes in the United States include:

Besides these causes, there are other trigger factors that largely contribute to sudden cardiac death presenting with sudden dizziness, palpitation and severe chest pain. In athletes older than 35, most sudden cardiac death events are caused by acquired atherosclerotic coronary artery disease (CAD). Many of these diagnoses may not be clinically apparent and may first present with sudden death. Due to the advancements in cardiac technology and diagnosis, the screening program significantly helps to early detect the cardiac abnormalities which are major factors for developing sudden cardiac death, even without the presence of warning signs and symptoms.

Cardiac muscle tissue or myocardium is a specialized type of muscle tissue that forms the heart. Cardiac muscle contracts and releases involuntarily. It is responsible for keeping the heart pumping sufficient blood to supply the whole body including the brain. Cardiomyopathy is a heart muscle disease that makes it difficult for the heart to pump. There are different types of cardiomyopathy. The most common heart muscle disease that causes sudden cardiac death in athletes is called hypertrophic cardiomyopathy (HCM) – a disease in which the heart muscle becomes abnormally thick. The thickened heart muscle makes it harder for the heart to pump blood sufficiently to the rest of the body. Nevertheless, heart muscle typically becomes thicker in athletes without clinical abnormalities. To screen and diagnose accurately, advanced diagnostic tools e.g. echocardiogram and highly expert sport cardiologists are crucially important. An echocardiogram is diagnostic cardiac ultrasound. During the test, ultrasound (high-frequency sound waves) from a hand-held wand placed on the chest provides pictures of the heart’s valves, chambers and structure and helps evaluating the pumping action of the heart. Not only screening by echocardiogram, but other medical history e.g. underlying disease and family history of cardiovascular disease must be also used to evaluate risks of sudden cardiac death.

The most effective tool to greatly reduce risks of sudden cardiac death in athletes is a screening program, particularly for professional athletes who have to participate in the competitions which continuous trainings are required. Screening protocol for prevention of sudden cardiac death in athletes typically includes a physical examination and medical history e.g. underlying disease, family history of cardiovascular disease, previous abnormal signs during exercising or playing in the field including shortness of breath, unconsciousness, dizziness, palpitation and sudden chest pain. Tests to screen include an electrocardiogram (ECG) and echocardiogram. ECG is a test that measures the electrical activity of the heartbeat. With each beat, an electrical impulse (otherwise known as wave) travels through the heart. This wave causes the muscle to squeeze and pump blood from the heart to the rest of the body. In addition, an echocardiogram is also used to evaluate the pumping action of the heart and visualize the structure of the heart, heart’s valves and chambers. Although sudden cardiac death cannot be completely prevented, early screening can significantly help to detect cardiac abnormalities at its early stage and treatment could be given appropriately while lifestyle modifications can be accordingly changed.

Saving athlete’s life during the competitions

An automated external defibrillator (AED) is a portable electronic device that can be used to automatically diagnose the life-threatening cardiac arrhythmias or irregular heart beat. AED treats the abnormal heart rhythm through defibrillation which is the use of an electrical shock to reset the electrical state of the heart, allowing the heart to re-establish an effective rhythm. Unlike regular defibrillators installed in the hospitals, AED requires minimal training to use. Since it is designed to maximize the convenience, it is portable and easy to carry. Only applying the AED pads on the chest of the patients, it automatically diagnoses the heart rhythm and determines if a shock is needed. With simple audio and visual commands, AED is created to be simple to use for the layperson. The use of AED has been widely taught in many first aid, certified first responder and basic life support (BLS) classes. Not only being used in the hospitals by physicians and medical staff, AED can be used during emergency situation in the airports and competitive sporting events. Early defibrillation programs involving access to automated external defibrillators by targeted local responders have demonstrated a survival benefit for sudden cardiac arrest in many public and athletic settings.

To save lives from sudden cardiac death, the most crucial element is the readiness of medical team and first-aid devices including AED. In a collapsed and unresponsive athlete, sudden cardiac arrest should be suspected and AED applied as soon as possible, as decreasing the time interval to defibrillation is the most important priority to improve survival in sudden cardiac arrest. It does not only improve survival in athletes, but it also saves lives of other persons at athletic events who suffer sudden cardiac death. In addition, resuscitation equipment should be placed at a specific athletic venue, centrally located and highly visible, or brought to the venue by designated personnel such as an athletic trainer. Typical accessory equipment attached to an AED includes a pocket mask for rescue breathing, a towel to dry the chest before placing the pads and razor to shave chest hair if needed.

Several national guidelines have also advocated for placement of AED in the athletic setting including FIFA – International Federation of Association Football. More importantly, pre-participation evaluation is strongly recommended as the first step in the commencement of sport activity in order to evaluate physical fitness level and detect conditions that might be life-threatening such as cardiac abnormalities that potentially lead to sudden cardiac death. Although the incidence is rare, sudden cardiac death in the athlete is a traumatic event that has a large impact on society. Sudden cardiac death in the young has a devastating consequence on families, care providers and the community. 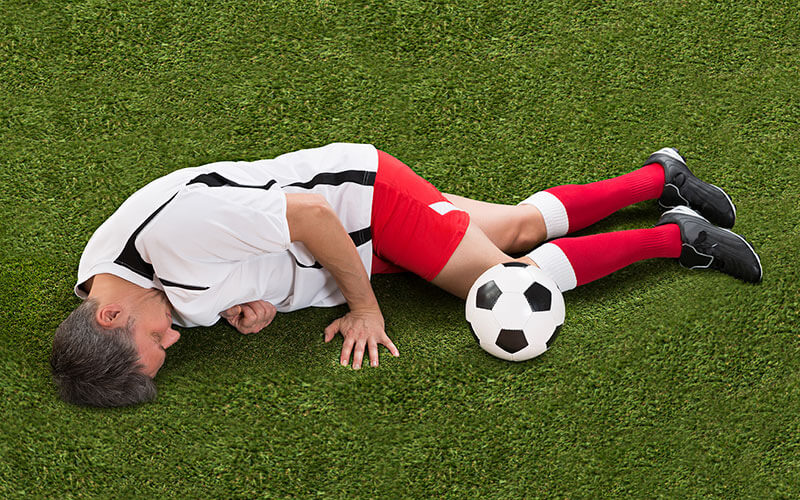