“Pneumothorax” a medical urgency that has to be treated

Get to know pneumothorax

A pneumothorax (collapsed lung) occurs when air leaks into the space between the lung and chest wall. This air pushes on the outside of the lung and makes the lung collapse. Pneumothorax causes leaking air to accumulate between the chest wall and the lung and increases pressure in the chest, reducing the amount of blood returned to the heart. Symptoms include chest pain, shortness of breath, rapid breathing and a racing heart, followed by shock. Pneumothorax can be a complete lung collapse or a collapse of only a portion of the lung. Since collapsed lung can put pressure on the heart, it is a fatal situation that has to be treated immediately upon diagnosis.

A pneumothorax can be caused by lung diseases that damage lung tissue such as chronic obstructive pulmonary disease (COPD), cystic fibrosis and pneumonia. Chest injury including any blunt or penetrating injury to the chest can cause lung collapse. Some injuries may happen during physical assaults, car crashes or being stabbed in the chest, while others may inadvertently occur during medical procedures that involve the insertion of a needle into the chest. A severe type of pneumothorax can also occur in people who need mechanical assistance to breathe. The ventilator can create an imbalance of air pressure within the chest. The lung may collapse completely. Signs and symptoms of pneumothorax in different groups vary depending on age, individual health conditions and risk factors. 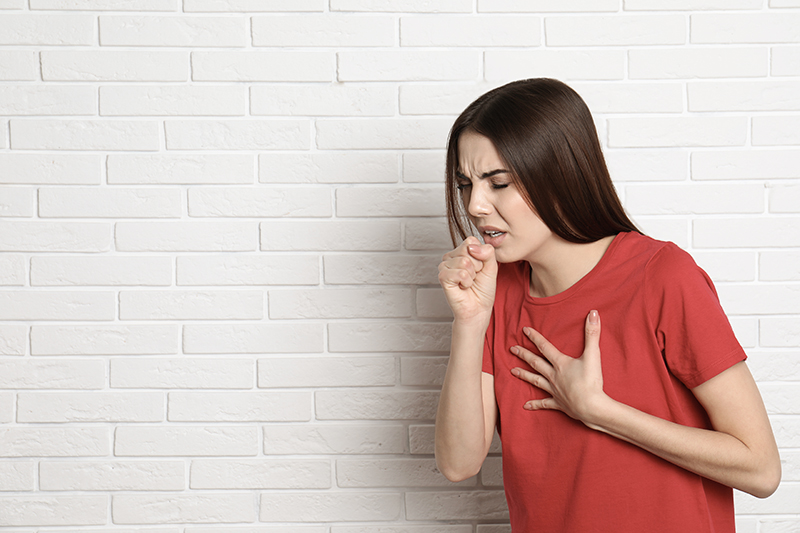 There are 2 common types of pneumothorax:

In Thailand, Secondary Spontaneous Pneumothorax is more common. Apart from heavy smoking, other possible risk factor might involve extreme air pollution which potentially increases risk of developing emphysema and other lung conditions. Especially in Bangkok and surrounding areas, a cloud of ultra-fine dust particles known as PM2.5 has recently returned. According to the Pollution Control Department (PCD), the concentration of PM2.5 pollutants should not exceed the PCD’s safe threshold of 50 µg/m³. If the number is greater than this threshold level, these fine particulate matters can substantially cause a wide range of health problems including respiratory disease and heart disease. For instance, a middle-aged patient who had run a marathon for 5 consecutive years developed pneumothorax. His imaging results reveal the blackened lungs even though he has never smoked. Normally it takes up to 10 years to manifest relevant signs and symptoms. However, in this case, it showed up extremely quick. In other case, young patient suddenly developed dry cough with severe chest pain during participating in a concert.  Diagnostic result indicates pneumothorax. Undiagnosed chronic emphysema was triggered by the loud noise in the concert. As a result, the alveoli became ruptured in the presence of sudden sharp pain in the chest.

Pneumothorax is generally diagnosed by using a chest X-ray. In some cases, a computerized tomography (CT) scan may be needed to provide more-detailed images. Ultrasound imaging also may be used to identify a pneumothorax.

Most cases who have pneumothorax attacks seek medical attention in emergency department due to sudden chest pain and shortness of breath. Imaging results obtained from chest X-ray might indicate the air leakage in the space between the lung and chest wall while leakage of the lungs could not be revealed. The goal in treating a pneumothorax is to relieve the pressure on the lung, allowing it to re-expand. Depending on the cause of the pneumothorax, a second goal may be to prevent recurrences. The selected treatment for achieving these goals depend on the severity of the lung collapse and overall health conditions. The previous treatment guideline in the past mainly involved chest tube insertion to reduce pressure on the lung. The leakage could be healed and closed automatically within 3-7 days. Surgery is only indicated in case of recurrence. However, the recurrent rate is considerably high, up to 30% after the first attack.

Due to the advancements in cardiothoracic surgery, Video-Assisted Thoracic Surgery or VATS, a minimally invasive surgery has developed. This minimally invasive technique has been increasingly used due to its superiority including smaller incisions (similar size compared to incision needed for chest tube insertion), less pain and lower postoperative complications.

During VATS procedure, cardiothoracic surgeons make 2-3 small incisions (sized 2-3 cm. in diameter) in the side of the chest. Small surgical instruments are inserted to visualize and treat pneumothorax. Possibilities include sewing blisters closed, closing air leaks, or removing the collapsed portion of your lung, which is called a lobectomy. Instead of having a large cut required in the open surgery, VATS does not need breastbone to be divided. As a result, small incisions can significantly lead to less pain, enhanced cosmetic benefit and fewer post-operative complications as well as faster recovery time and shorter hospital.

To minimize chances of recurrence, pleurodesis might be performed. Pleurodesis is defined as a medical procedure in which the pleural space is artificially obliterated. It involves the adhesion of the two pleurae–membranes lining the and enveloping the lungs. This procedure is commonly recommended for individuals who have had repeated episodes of pneumothorax. During the procedure, surgeon irritates the pleural space so that air and fluid can no longer accumulate. Pleurodesis is performed to make the lungs’ membranes stick to the chest cavity. Once the pleura adheres to the chest wall, the pleural space no longer expands and this prevents formation of a future pneumothorax. There are different types of pleurodesis. Mechanical pleurodesis is performed manually by brushing the pleura to cause inflammation. Chemical pleurodesis is another form to deliver chemical irritants such as medical talc to the pleura through a chest tube. The irritation and inflammation cause the lung pleura and chest wall lining to stick together.

After surgery, it is highly recommended to: